The Coaching Habit: a great approach when you want to empower your people

Empowerment has been around for a very long time. So why writing about it again?
Well, I want to share with you my experience with leaders in two different organisations and their way to apply empowerment. As it turned out, leaders in one organisation were very impactful and those in the other one were rather ineffective with their approach to empowerment. So, what was the difference?

In this organisation the majority of leaders considered empowerment as straight delegation of tasks to their direct reports. On the surface this sounds okay, even though seasoned users of empowerment know this is not the real thing. However, digging deeper showed that the way most of the leaders delegated was more or less by dumping tasks on the desks of their people without considering their abilities or asking whether they would need any support. A culture survey in this organisation showed that the people doing the work felt left alone by their bosses regarding coping with challenges with the tasks at hand. The leaders, on the other hand, thought (in the same survey) that their people didn’t need their support to learn. Such experiences always amaze me, considering how long concepts like empowerment have been around.

I experienced a very different approach in an organisation that committed itself to empowerment, moving away from directive leadership styles. A couple of things were different to the previous organisation which, in my view, made it successful. These differences were not only felt by the people but also showed in the performance of the organisation as they leapt ahead in their turnover and profitability!

What were those differences? 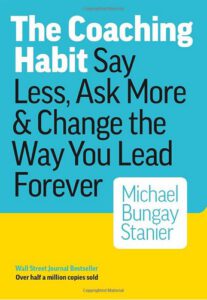 Now, what is the essence of The Coaching Habit, written by Michael Bungay Stanier? His focus on the term habit is based on research done by Duke University (Durham, North Carolina), revealing that 45% of what people do is based on habits. Stanier lists five key steps to develop this habit for a coach-like interaction with direct reports.

From my experience when changing habits, the support from an external coach can be very helpful

In addition, it may be very helpful to define one new habit as the core to the whole change. Charles Duhigg, the author of the book The Power of Habit, calls this a keystone habit. The term keystone refers to the old way of building arches where the top and final stone was called keystone, holding all other stones of an arch in place. Hence, this keystone habit could be essential for your inner transformation as it is the one that supports other new habits to be adopted.

Finally, to support your practice, I recommend that you have people around you who can give you feedback on your journey to the new habit.

Of course, this habit is only effective when combined with a way of engaging in conversations which support your people when they struggle with new or challenging tasks. The essence is asking the right open questions to have a coaching like conversation.

In the latter part of his book Stanier focuses on seven questions which form a sequence of coaching-like conversations. In the following, I’ve listed the top lines of these seven types of questions:

Asking questions like ‘what’s on your mind?’  to understand what is keeping the other person’s mind occupied.

Rather than sticking with just one element explore the context or map of the subject the other person brings into the conversation. A question like ‘And what else?’ is typical.

Exploring the challenge, digging deeper, and possibly finding underlying issues. For example, it could be ’What’s the real challenge in this for you?’ with the emphasis on the word real.

4.      The foundation or outcome question

Looking for the real need that needs to be addressed with a solution. The question could be ’What do you want?’ or with the same specific emphasis as above ‘What do you really want?‘.

After having explored the whole context and theme it is time to ask the other person what type of support they really need from you as their leader. This could be a simple question as ‘How can I help?’.

7.      The insight or learning question

At the end of a coaching conversation it is always very helpful to trigger a reflection on the insights and learnings gained from the conversation to support the developmental process of the person’s competencies. 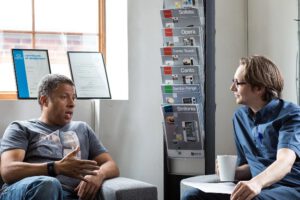 With all these questions it is important that you make them your own by choosing your own words and variations of the questions. That ensures you come across authentically and are not just repeating a list of questions learnt.

Embarking on this journey to adopt the coaching habit may be challenging at times. However, based on my experience when I supported the leaders of the above-mentioned organisation, it was very heart-warming and encouraging for each of them to see how their people became stronger and self-sufficient in doing their job and creating fantastic results with the side-effect of being more motivated and satisfied as well.

If you like to start this journey, but you are not sure how to move forward or where to start, please get in touch with me and we can explore your journey and possible support from me to help you succeed!

Can annual appraisals be enjoyable even? Part IV

Lessons for effective leaders from latest insights into neurosciences